The Gibraltar Football Association, the GFA, is one of the Worlds oldest, dating back to 1895.

This article describes a little of its history and the positive impact on the ball skills and competitive edge of their players that the influx of thousands of National Servicemen made in the late 1940’s and early 1950’s, This, combined with visits of senior professional teams from mainland Europe, turned them into a group of players who punched well above their weight and enabled them to compete at any level, it also raised the level of support from the indigenous populous of 30,000

The site also highlights the subsequent negative effect resulting from the Spanish football authorities’ embargo on senior Spanish teams from playing in Gibraltar and their subsequent impasse on the GFA’s attempts to obtain affiliation with Uefa.

Gibraltarians inherited their love of football from kick about games with the British Garrison in the late 1800’s. With a genetic mix of Spanish, Italian (survivors from a shipwrecked Italian galleon who settled at Catalan Bay, on the south side of the Rock) and the Brits (who have had a large garrison there since 1704) they took to the beautiful game with passionate enthusiasm. On the isthmus, the flat area of land connecting Gib and Spain, they built a circular racetrack enclosing a grassed football pitch and had their first competitive match against the military in 1901.

From their early days with a break during WW2, the GFA grew into a well organised structure, with a number of divisions and shortly after the War’s end a new stadium was built on land close to the Airport. 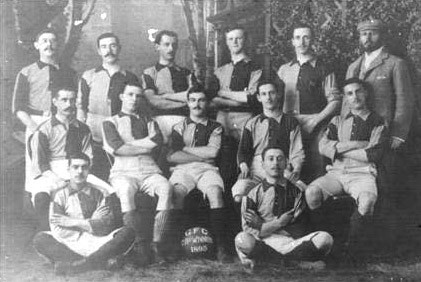 THE MILITARY RETURN TO GIBRALTAR

In the early years following the War’s end, especially through the period from 1949 to 1955 the GFA came of age, and was given added momentum by the onset of military conscription in the UK with many thousands of young men being posted to Gibraltar as part of their two year military training. This added to the few hundred permanent military based there so that there was a very large garrison of testosterone fuelled young men were looking for a way to use up their surplus energies and football was by far the number one sport. A number of military football leagues were formed some units fielded more than one team and league and cup games were  fiercely competitive. At least three military pitches were constructed, two at Europa Point on the eastern side of the Rock and a third in the town—this was generally known as the Naval ground and in the main hosted those games played by the permanent Naval base and teams from the visiting Navies, these swelled the Naval force by many thousands.

The following describes the experiences of two of those National Servicemen;

Faber Dewar, an RAF conscript who had represented Scotland as a Youth International and subsequently at a semi-professional level in Scotland. He was posted to Gibraltar in 1951

Trevor Sidaway, a REME conscript, on Aston Villas books as an amateur. Posted to Gibraltar in early 1953

Both played for their units in the Military leagues and both were selected to play for the Combined Services in a series of games against the Gibraltar Football Association. Both also played for a Rock eleven selected from the pick of the Military and Civilian teams to play against visiting professional teams from mainland Europe.

Representative teams were selected from three distinct groups from both the Military and Civilians;

This team was drawn from players registered by the Gibraltar Foot ball Association and was regarded by Gibraltarians as their “National” team.

Selected from all the military—Army, Navy and Airforce-- serving in Gibraltar and from visiting British Navies.

A team selected from the best civilian and military players. 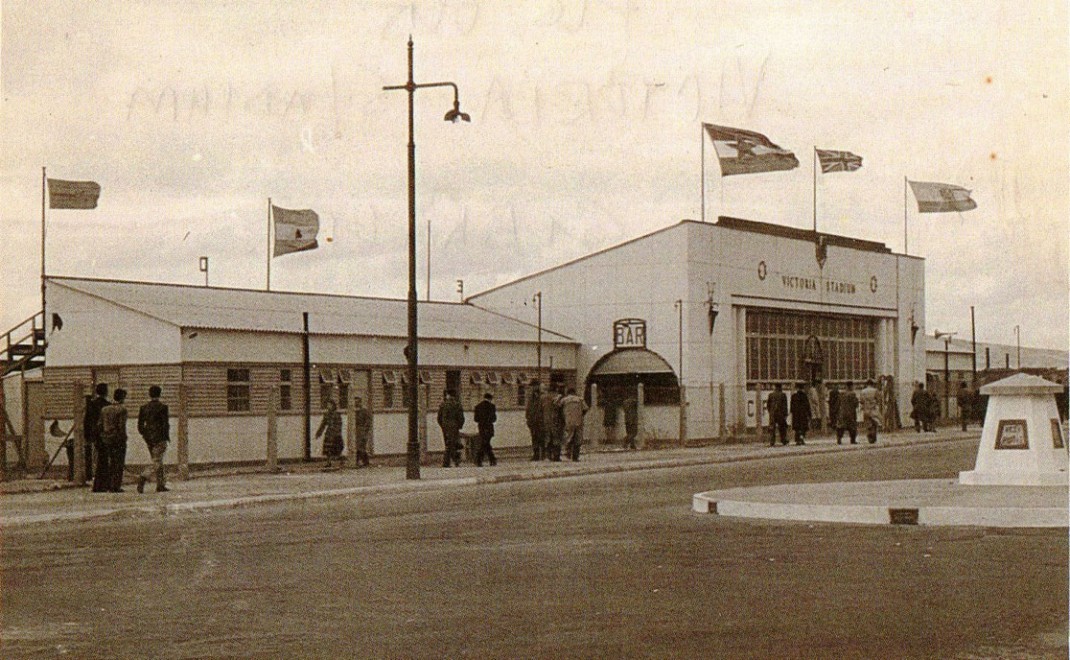 The Gibraltar Cup competition was introduced as an annual series of five matches between the GFA and the Combined Services team which included a number of players on the books of senior UK professional teams.

These games were fiercely contested by players and spectators alike, the stadium was usually filled to capacity and was an automatic Saturday evening draw for many of the troops.

These are some of the professional teams that visited Gibraltar:

Teams from the UK also visited, including an RAF eleven that included five established British Internationals and a Bomber Command select eleven.  Against these senior professional teams the GFA did well, including a notable 2-2 draw against Real Madrid and a win against the RAF and Jonkopings

Some of the visiting European teams were also pitched against a Rock Select VI. These included Hadjuk Split, Jonkopings, Beogradski and Whacker.

Both Faber Dewar and Trevor Sidaway were selected for some of these games and a number of other military personnel were picked to play, these included: Charlie Twissell/Navy, Duncan/RAF and McMahon/Army.

THE END OF THE GFA’S GOLDEN YEARS

Spain places an embargo on Spanish Clubs playing in Gibraltar.

Steve Menary in his book “OUTCASTS! the lands that FIFA forgot” writes;

The 1950’s were to be turbulent times for Spain and Gibraltar. In 1956, Spain granted independence to its territories in Morocco, but, crucially, retained two enclaves on Moroccan soil in Ceuta and Melilla - a distinct parallel with Gibraltar but not oneseemingly apparentin Spanish political circles.

The previous year, Spain’s Delegacion Nacional de Deportes had decided that all Spanish Sports Clubs needed written permission to play in Gibraltar. Teams without this permission were turned back at the border, including Real Madrid, Valencia and Sevilla - and so started what many in Gibraltar see as the slow death of football in the colony

This decision by Spain was the beginning of the end of the era when top European teams were being drawn to play in Gibraltar and in 1960 National Service was ended in the UK meaning that the number of Military based there fell from several thousand to a few hundred.

This added to the dilution of competitive representative games and a growing lack of interest by the average Gibraltarian.

Spain however places no restriction on those Gibraltarians who have the necessary skills to play at a professional level in Spain. These talented players, for one reason or another, rarely turn out for their “International” side, again reducing the potency of the GFA. 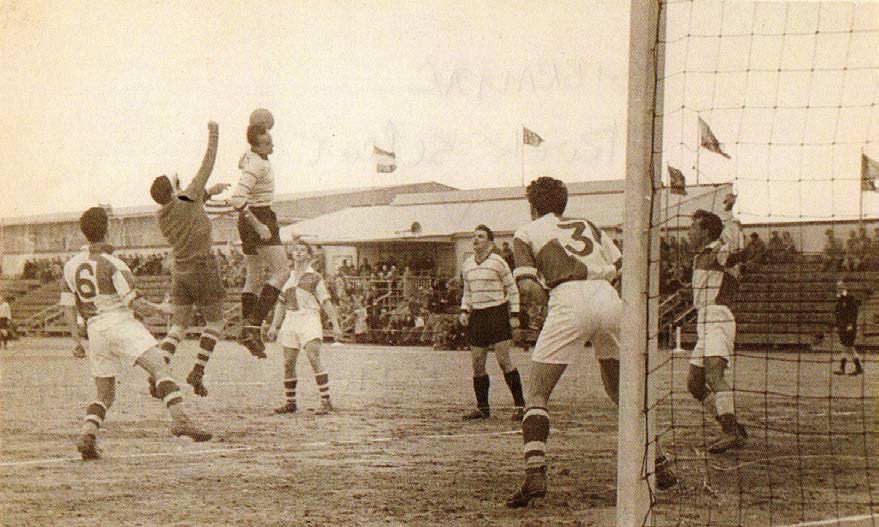 On the 24th May 2013 UEFA Congress unanimously voted in Gibraltar as the 54th member of the UEFA European Football Family. A battle that began way back in 1997 was finally won and the Gibraltar Football Association finally received the international recognition, at European Governing Body level that it had been searching for for many years.

Gibraltar’s International teams of all ages, Women’s Football and Futsal now compete in  recognised UEFA tournaments as do our Clubs who now Qualify in their own right for relevant European Club Competitions based on their performances in Domestic Tournaments.

In July 2014 the Champions League and Europa League finally came to Gibraltar with Lincoln Red Imps and College Europa becoming Gibraltar’s first ever representatives in these tournaments.

The Gibraltar FA also organised its first ever international Women’s Development tournament in July 2014 with teams from the Algarve FA, Luxembourg and Andorra taking part. Futsal has also seen international competition too as well as  clubs competing in the relevant Futsal European Club competitions. 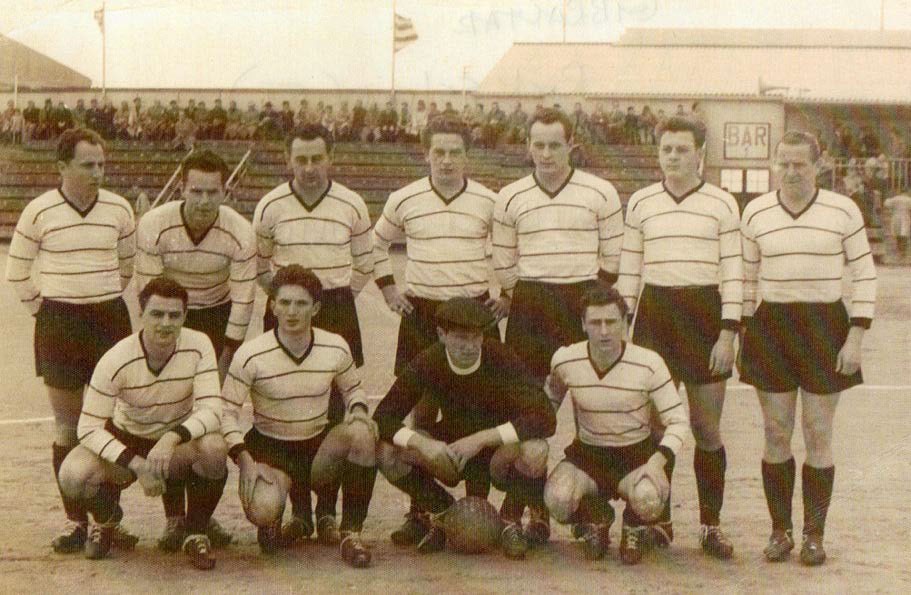